In the town of Westfield, Massachusetts stands the statue of General William Shephard—a United States Representative and military officer—who protected the Springfield Armory during Shay’s Rebellion in the height of the Revolutionary War. Over the years, Shephard’s statue along with others in the area, had began to build up large amounts of corrosion making it hard to distinguish the statue’s features. With a dedicated historic commission leading the way, the town of Westfield began collecting donations in the early 2000’s to help with the conservation of these statues. After funding was met, the big question became what method of cleaning should be used in conservation efforts going forward?

After obtaining the necessary funds, the commission approached Gordon Ponsford and his team to take on the project. With over 30 years of conservation experience guiding the way, Gordon suggested the use of laser cleaning systems in lieu of more traditional methods like sand blasting.

Gordon started using laser cleaning in his conservation projects a number of years ago, as he found that no other method could match “the delicacy of the way it removes corrosion.” He said that eventually his team had performed projects using the whole spectrum of traditional cleaning methods, before being finally being introduced to laser cleaning. Right away he recognized the impact that lasers would have in the future as an up and coming technology and has since then been an adamant supporter of using laser cleaning technologies in historic conservation projects.

(For more information on General Shephard’s life and the statue honoring him, please visit the city of Westfield’s website here). 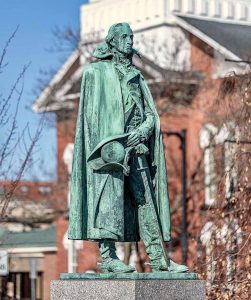 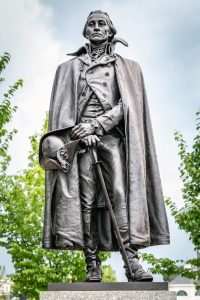 Over the course of a few days, Gordon and his team were able to remove the corrosion, apply the patina, and then add the conservation wax as the final step. They opted for our 100W lightCASE, as it’s one of our most portable and easy-to-use laser cleaning systems. The OSH20 optic was small enough to clean around the curved edges and features of the statue, while still maintaining an efficient and precise clean.

In the future, Gordon mentioned that him and his team will return to perform annual wash and wax treatments for the statues.

Gordon and his team were able to complete the project earlier this week and were met with fanfare from the whole town. The “Experience Westfield and More” Facebook page is an active one, boasting over 7,500 members. This particular project has over 4 posts on the page so far, with videos and photos showing detailed before, during, and after comparisons. The comments range from those praising Gordon and his team on their conservation efforts to members of the town expressing the need to go and pay their respects to the statue in person. 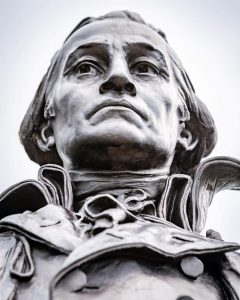 The post laser-cleaned photos of the statue honoring General William Shephard speaks volumes for Gordon and his team’s conservation abilities. From start to finish the statue went from a weathered, sea foam green to a stunning brownish-black that highlights Shephard’s features. Now you can see details on Shephard’s statue that were previously undistinguishable, like his high cheek bones and the buttons on his uniform. The overall transformation is truly remarkable and gives General Shepard back the air of prestige he had when commanding his troops.

Gordon himself said this project “turned out exactly the way [he] wanted,” and with a Civil War statue and several other monuments already slated for conservation, the town of Westfield will have more excitement to come.

WHATEVER YOUR NEEDS, ADAPT LASER HAS THE SOLUTION FOR IT

Adapt Laser specializes in providing the highest-quality laser cleaning systems available. Our systems come in both handheld and automated options making them versatile for different applications and surface preparation. We offer operations and safety training to ensure both you and your employees get the most out of their laser cleaning system. Over the past 15 years we have helped equipped numerous companies across varying industries with our state-of-the-art laser cleaning solutions.

If you’re looking for a faster cleaning process, contact us today or call (816) 466-5855 to find the right laser cleaning system for you.