Last year we were contacted by engineers at Fleet Readiness Center East who have been working to bring laser ablation technology into their facility for some time now. Their Advanced Technology and Innovation Team and Materials Engineering Division have been specifically looking for a faster, safer, and more cost-effective approach to the media blasting processes they’ve been using to clean parts prior to container and aircraft repairs.

WHAT IS MEDIA BLASTING? 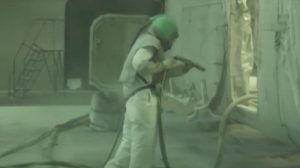 Media blasting—also commonly referred to as “abrasive blasting”—is a cleaning process that uses high air pressure to blast small particles of media onto a surface or part. This method has been used for many years and works with a variety of applications including surface preparation and finishing, contaminant and coating removal, and smoothing, roughening, or altering a part’s surface.

While this type of cleaning was once considered a fast and effective method, many companies like FRCE are starting to see the wear and tear it creates on their materials and equipment and the negative effects it can have on both the environment and on their operators.

Since 1943, FRCE has played an important role in providing world-class maintenance, engineering, and logistics support for Navy and Marine Corps Aviation. Now, they’re wanting a faster process to clean and strip aircraft components and parts containers prior to rework. Their current blasting method using glass beads, has been problematic, as the glass has blown holes into the containers during the process—causing lasting damage.

After FRCE production supervisors and engineers reached out to our sales team for a demonstration last year, we set a date to visit them at their facility at the Marine Corps Air Station in Cherry Point, North Carolina. Two of our experienced laser professionals and one of our CL1000 laser cleaning systems then spent the day with several groups of maintenance artisans, engineers, Marines, and Coast Guardsmen as they walked through how laser ablation technologies can help address the issues FRCE is facing with their media blasting processes. 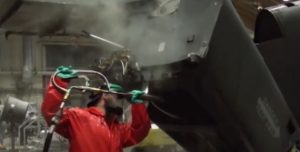 The idea that FRCE engineers first had, was to purchase a handheld laser cleaning unit that would be used on smaller projects while they gathered research about the laser ablation’s effectiveness, before moving on to working with larger aircraft components. Ultimately, they were wanting to work toward a goal of cleaning a full aircraft using a robotic laser ablation system.

Flash forward to almost a year later and the plan to purchase not one, but two laser cleaning systems is well underway. Materials engineers found that the higher cost of a laser cleaning system was quickly alleviated when compared to the growing costs of blasting material, blasting preparation and cleanup, PPE required, and the unknown health factors associated with the basting process.

To see more on our day at FRCE’s facility at the Marine Corps Air Station in Cherry Point, North Carolina, watch the video below.

WHATEVER YOUR NEEDS, ADAPT LASER HAS THE SOLUTION FOR IT

Adapt Laser specializes in providing the highest-quality laser cleaning systems available. Our systems come in both handheld and automated options making them versatile for different applications and surface preparation. We offer formal laser operations and safety training to ensure both you and your employees get the most out of their laser cleaning system. Over the past 15 years we have equipped numerous companies across varying industries with our state-of-the-art laser cleaning solutions.

If you’re looking for a faster, totally unique industrial cleaning and coating removal process, contact us today or call (816) 466-5855 to find the right laser cleaning system for you.